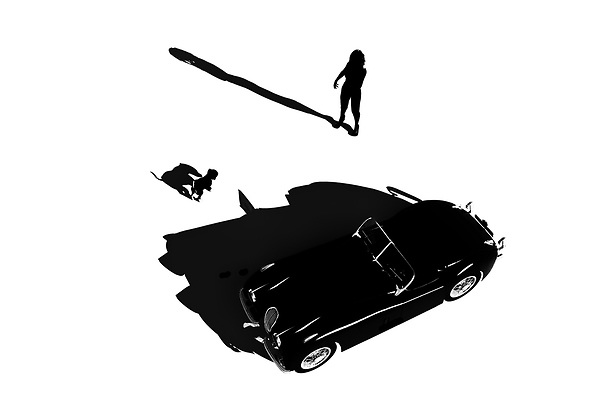 Who is this young English girl? Where is she going? We can only wonder about her past. At the same time, we can only speculate about her future. We assume the car to be hers, but who can say? Perhaps she and the dog are waiting for a ride. If so, who are they waiting for? This unique orthochromatic fine art piece by Jan Keteleer invites a number of compelling questions. One of the most appealing things about this piece is the fact that you can have it installed virtually anywhere. It works well in both personal and professional spaces. (Jan Keteleer) 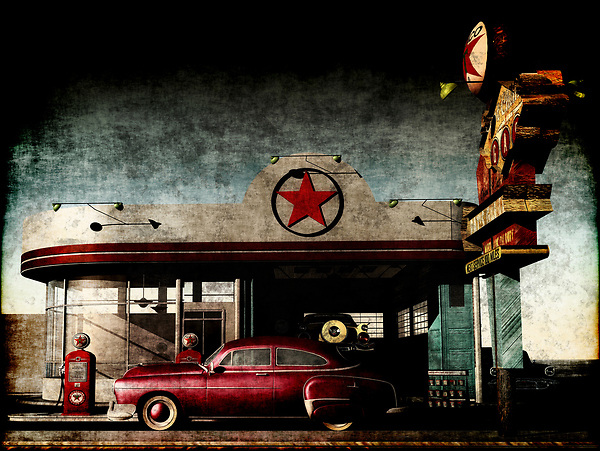 When you take a look at “Next Service 100 miles” imagine that you are the driver of the 1950’s Chevy Fleetline and you’re on a road trip with the perfect partner. You’re in the middle of nowhere on your vacation away from home and you’re in need of gas as the next service station is over 100 miles away. Next Service 100 miles is the perfect painting to grasp the idea of a faraway place that existed decades ago. It combines all of the embellishments of a traditional 50s gas station meanwhile incorporating the perfect vintage shading around the frame of the painting. (Jan Keteleer) 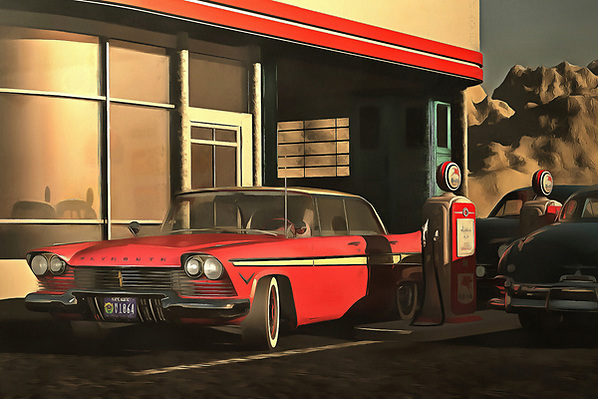 This image depicting an old-time Plymouth at a rural gas station brings to mind warm memories of warm summer nights. It brings to mind the music of Bruce Springsteen. It creates a powerful connection between ourselves and our memories. At the same time, the scene is simply an engaging one. It is a beautiful car on a beautiful early evening. The tank is almost full. The night is going to have something to offer. The sooner you get out on the road, the sooner you can experience it yourself. Available as wall art, t-shirts, or as interior products. (Jan Keteleer) 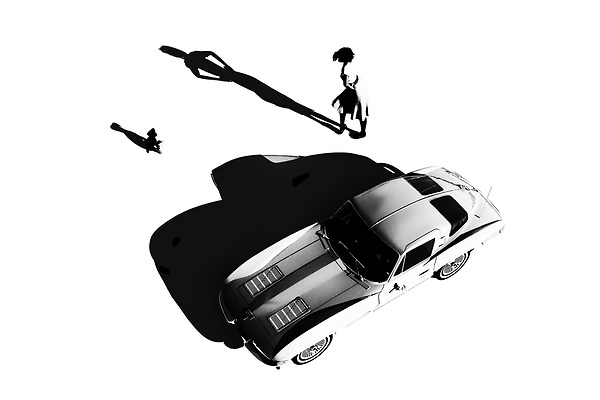 An American girl near a fast car. It doesn’t get much more exciting than that. This iconic visual utilizes orthochromatic style to create something truly unique. It is easy to look at these things, and imagine what might happen next. To be sure, we want to be in the car with her. We want to travel to wherever she is going. This piece feeds into our need to enjoy the open road in the best way possible. We dream of seeing the world. Whether or not you can, you will find this piece to be a welcome addition to your home or professional space. (Jan Keteleer) 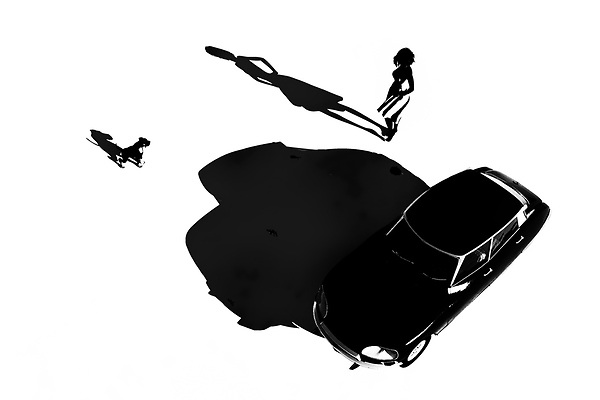 This orthochromatic piece combines a young girl with a fast car. You can also a dog nearby. There are dozens and dozens of unique details to be absorbed here. It is easy to look at this woman and this car and imagine the next few moments. We can see her getting in the car. We can see the dog jumping into the backseat. The car starts. It roars out of the scene. At this point, we can no longer follow. All we can do is wonder if we will ever have the opportunity to see this young French girl again. (Jan Keteleer) 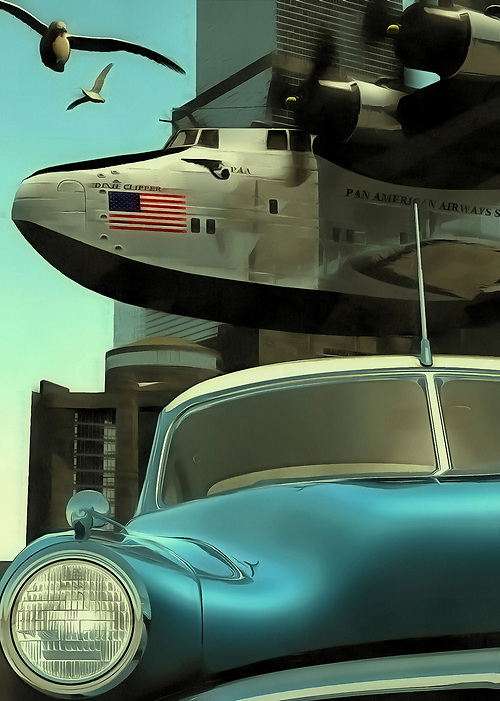 This scene comes to us from out of the past. Judging by the car and plane depicted in this scene, we can guess that this piece is set in the 1950s. The car is a classic now, but it was once the newest, hottest thing on the road. Its iconic design transports us back to this era with ease. Behind the classic car, we can see an airplane with its massive propellers. The American flag is brilliantly displayed along the side of the plane. It seems likely that this plane has experienced some pretty amazing adventures. Gulls fly alongside the plane. It is a beautiful day. Winter conditions are often harsh in Sweden, with lots of snow, ice and darkness.
We travel a lot in northern Sweden and this HD-1080 video clip collection shows the dificult conditions when driving on slippery roads and motorways.
Ulrich Kunst and Bettina Scheidulin
Website - Blog - Galleries - Portfolio

Buy this picture
We came across the bullet hole riddled Buick while exploring the Eureka Mine, which is now within the boundaries of Death Valley National Park, and not far from the remains of the vandalized house of Pete Aguereberry in nearby Harrisburg.

In 1905 when Shorty Harris and his greenhorn partner Pete Aguereberry discovered gold in Providence Ridge it led to a short term mining boom in the area. Shortly the tent town of Harrisburg grew out of the high desert. Of all the prospectors and miners who toiled in the Eureka Mine only Pete persisted, working the mine until his death in 1945. Pete was also responsible for cutting the road to Aguereberry Point, which he did so that he could show his friends the spectacular views of Death Valley that can be seen from that location.

Who the car belonged to is a mystery. Some sources say it was Pete Augereberry’s but the car would have to be a pre-1945 model for that to be true. This particular Roadmaster body style was used by Buick between 1942 - 1947 and I suspect, based on some of the trim work, that it is a 1947 model. Another rumour was that the car belonged to a banker in nearby Skidoo whose wife would take it to Harrisburg to visit Pete, which might also explain some of the bullet holes.
Rick Pisio
Website - Blog - Galleries - Portfolio

Buy this picture
Quincy Railroad No. 2 vents steam at the NCRy Sunol Depot. Built in 1924 by ALCO in Schenectady, NY, the Quincy Railroad No. 2 spent the first few years of its career hauling rock, concrete, and very large gasoline-powered shovels for the construction of the Bucks Ranch Dam from 1925 to 1927. No. 2 regularly pulled finished lumber and other freight for the Quincy Railroad until 1945 when it was relegated to standby status. In 1970 she was sold to the Iron Horse Railway in Hayward, CA and pulled excursion trains for the Castro Point Railway in Richmond through the 70's & 80's. The No.2 began operating for the Niles Canyon Railway in 1992, pulling passenger excursion trains on a regular schedule until it was put in the shop in August of 2000 for a major overhaul, returning to service on the NCRy in of June 2002.
Rick Pisio
Website - Blog - Galleries - Portfolio